The universal ThermoGuard EGT Gauge kit contains all the components necessary for an in-dash installation. It includes one stainless steel compression fitting to secure the thermocouple sensor to the engine's exhaust system.

The compression fitting can be supplied in four common sizes: 1/8" or 1/4" BSP (British Standard Pipe thread) plus 1/8" or 1/4" NPT (USA National Pipe Thread). (Please refer to the Installation page to determine which size fitting might best suit your vehicle, or contact us by email at: info@thermoguard.com.au.) 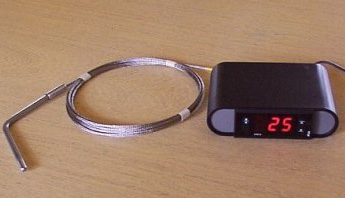 Indicator Case for on or under-dash mounting

​A strong ABS plastic case can be provided to install the digital indicator unit on or under the vehicle dashboard. The combined unit is quite light and can often be attached with double-sided adhesive tape (not supplied). 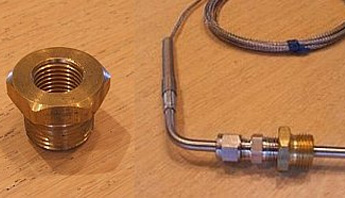 ​Many aftermarket turbocharger and exhaust systems are provided with a threaded port in the turbo outlet pipe. Some of these, including Australian DTS, MTQ & Safari systems, are threaded Metric M18 x 1.5. This brass adapter bush allows a standard 1/4" BSPT compression fitting to be used with these ports. 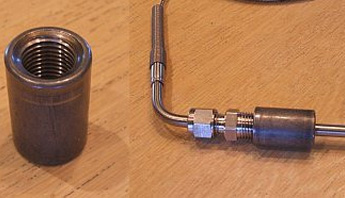 ​For turbocharger and exhaust systems that are not provided with a threaded port in the turbo outlet pipe, this steel
socket can be welded onto the exhaust pipe close to the turbocharger outlet and allows a standard 1/4" BSPT compression fitting to be used. 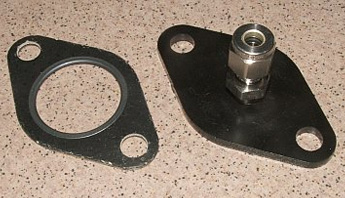 ​The Land Rover 300Tdi engine without EGR [Exhaust Gas Recirculation] has a blanking plate on the exhaust manifold which is ideal for installing the thermocouple sensor. A replacement plate, drilled and threaded to accept the sensor, can be provided, complete with a new gasket.

(Please note: The compression fitting shown is not included with the plate.  One fitting is supplied with the standard EGT gauge kit.)

What is an EGT Gauge (Pyrometer)? Expand

An EGT Gauge (or pyrometer in heavy truck industry jargon) is a high temperature thermometer.

It  consists of a sensor which is inserted into the exhaust system close to the engine and an indicator or gauge on the dashboard to display the measured temperature to the driver.  EGT gauges have been standard equipment on heavy trucks for many years.

Unfortunately, the manufacturers of  4WD vehicles, light trucks and other machinery have not yet seen fit to provide this important information to the owners of these vehicles.

How is EGT measured? Expand

The sensor is a robust device called a thermocouple, which is constructed to withstand the extreme conditions inside the exhaust system.  Thermocouples have been used for decades in very high temperature industrial processes such as furnaces, boilers etc.

The indicator may be either a conventional circular dial-type gauge or an electronic digital display.

The ThermoGuard digital electronic indicator offers additional features, including the ability to record and display the maximum temperature reached.

The ThermoGuard EGT Gauge allows the driver of a turbo-diesel vehicle to monitor the EGT of his/her engine at all times, especially when it’s working hard - like climbing steep gradients with heavy loads or towing heavy trailers or caravans.

Why should I be concerned about EGT? Expand

Excessive EGT causes irreversible and expensive damage to engine components subjected to the extremely hot combustion and exhaust gases.  This can include turbo-charger housings and waste gate valves, exhaust turbine wheels, exhaust manifolds and, in extreme cases, even burning, cracking or melting of piston crowns.

Damage of this type is invariably expensive and often very inconvenient (or worse), especially should it occur in remote regions, far from specialist repairers.

The ThermoGuard EGT Gauge provides inexpensive insurance against this type of damage.  It is equally applicable to all types of turbo-diesel engines:

Why does excessive EGT occur? Expand

It’s fairly common knowledge among motoring enthusiasts that, in petrol engines, lean fuel/air mixtures can cause engine overheating and potential damage to valves and valve seats. Rich mixtures, on the other hand, while ruining your fuel economy and creating unnecessary emissions, are generally unlikely to cause any engine damage.

What is much less well-known is that the effects are effectively reversed in diesel engines.  The intake of air is usually un-throttled in diesel engines, so roughly the same mass of air is ingested regardless of the load on the engine.  At low load, such as when idling or cruising slowly at a steady speed, much more air is available than is needed to combust the small quantity of fuel injected.  This would be the equivalent of a very ‘lean mixture’ in a petrol engine, but is of no concern. The excess air absorbs much of the heat of combustion (and in doing so expands) and the exhaust gas temperature remains quite low (often under 300 °C).

At full load, however, the situation changes rapidly.  The exhaust gas temperature increases rapidly as the quantity of fuel combusted increases, in relation to the mass of air available in the engine’s cylinders.  When more fuel is injected than can be efficiently combusted, the EGT can reach levels above 720 °C, which can cause irreversible damage to engine components in contact with the exhaust gasses.  This may include piston crowns, exhaust valves/seats, manifold and, most commonly in the case of turbo-charged engines, the turbo-charger housing, exhaust turbine and waste gate.

Modern, high-performance, turbo-charged and intercooled engines have power and torque outputs unheard of in diesel engines of only a few years earlier.  They are quite highly stressed and operate closer to the limits of their components, as standard. As well, the fuel injection system not only has to meter the fuel charge in relation to the load on the engine but also in proportion to the mass of air available for combustion.

In a turbo-charged engine, this varies with the boost pressure and the air charge temperature.  These parameters in turn depend on the load, speed, ambient temperature, humidity, altitude etc. - a complex matrix of factors.  The very latest fully electronically controlled turbo-diesel engines may have the sensors and programs to cope with all these factors – but only while they’re all working perfectly.

What can cause excessive EGT? Expand

In a well-maintained standard engine, with a correctly calibrated and timed fuel injection system, the quantity of fuel injected should rarely, if ever, exceed that which can be efficiently combusted with the mass of air available.  However, any turbo-diesel engine which has been ‘tuned’ or ‘chipped’ for improved performance is likely to generate higher than  normal EGT under heavy load conditions, even if the fuelling has been adjusted on a dynamometer.

But (there’s always a ‘but’!), even with the best efforts of the factory or tuning specialists, excessive EGT can still occur due to a number of not uncommon factors:

The most likely cause is a restricted air supply to the cylinders.   As well as the obvious possibility of a clogged air filter element, other possible causes that have been known to affect various engines include:

Excessive fuel delivery will also cause high EGT.  This could be a result of a failure within the injection pump itself, but is more likely to be a result of over-zealous ‘tuning’ of the pump or injection system.

These days, many specialists offer tuning services to turbo-diesel owners to improve towing and overtaking performance.  These modifications usually provide very satisfactory results but invariably lead to the engine operating closer to the limits at full load.

If ‘overdone’ or if any of the other factors mentioned previously come into play, excessive EGT can quickly result  - and the damage will be done  before any indication of a problem is provided (if at all) by the vehicle’s standard coolant temperature gauge.

How hot is too hot? Expand 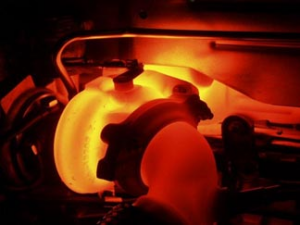 By far the best place to measure EGT is upstream of the turbo-charger (that is between the exhaust ports and the turbo exhaust gas inlet).  When measured here, it is generally accepted that sustained temperatures in excess of 720 °C (~1330 °F) will result in progressive and irreversible damage to components.

On some vehicles it is difficult to install the sensor upstream of the turbo-charger, so a downstream position is used, usually in the exhaust pipe just below the turbo exhaust outlet flange.  There is, however, a large temperature drop across the turbo, which may approach 200 °C.  Therefore, for downstream installations, a maximum temperature of 520 to 550 °C is recommended.

How do I reduce excessive EGT? Expand

In the very short term, just ease off!

Very high EGT will only occur if the engine is operating at high load.  Operating at less than full throttle should drop EGT almost immediately.  If the high EGT occurs while climbing a steep gradient, changing to a lower gear and driving at a lower speed will normally do the trick.

Of course, should the excessive EGT occur under conditions which are normally not a problem for your vehicle/engine, then begin checking for possible abnormal causes as mentioned previously.

What else can an EGT Gauge do for me? Expand

Similar to a vacuum gauge in a petrol-engined vehicle, an EGT gauge gives an almost instantaneous indication of the load on the engine.  In fact, EGT is even more directly related to the instantaneous rate of fuel consumption.

As caravan and motor-home owners know only too well, driving into a strong headwind is very detrimental to fuel economy.  Under heavy load conditions like this, an EGT Gauge can be used to choose the best combination of gears and cruising speed to give maximum economy.

Where can I get an EGT Gauge? Expand

Conventional analogue dial-type EGT gauges are available from many manufacturers (and at many widely varying levels of quality!)  However, I believe the ThermoGuard EGT Gauge Kit, with its precise digital electronic indicator, offers superior value and features.

The ThermoGuard EGT Gauge Kit is suitable for most turbo-diesel four wheel drive vehicles and light trucks.  It costs A$279.00 plus postage and includes all the components needed for a complete installation of an in-dash mounted unit.  An optional on-or-under-dash ABS plastic case for the digital indicator is available for an additional A$25.00.  The kit may be fitted by an experienced ‘home mechanic’ or by any competent diesel specialist.

Where can I get more information? Expand

Why Diesels are Different

Turbo-charging and Super-charging (what it is & what it does, for diesels)

Charge Cooling for Diesels (intercoolers and what they do)